Bake It On Wheels™ is a unique and exciting experience when it comes to party entertainment options. Rather than sending your guests to a random location and struggling with parking or scattering among strangers, our fully equipped bakery on a bus is a safe and convenient alternative. With so many confectionary class options to choose from, we happily cater to a wide variety of age groups and skill levels.

As the party host, you have the option to entertain your guests with our baking and caking experience, a day of donut and cookie decorating, or diving into cakesicles and chocolate dipped caramel wand making. Regardless of the package selected, your guests will be sure to get the party started at our one of a kind DIY Sprinkle Mix Station and a Frostini – Cotton Candy Mock Martini Kid Drink upon arrival and quickly be consumed in all of the candy coated fun to follow.

Simply choose your package, pick your date, pay your deposit, and get excited! As an added bonus, we’ll take care of the digital invitation pdf for you to forward to your guests. We look forward to driving to the comfort of your chosen destination in our sweet ride and hosting your bash in our fully licensed and insured bakery on wheels!

Jump on the bus and bake with us! Our fully equipped sweet ride offers more than your candy heart can ask for when it comes to a wow-factor party entertainment option. Starting with our unique DIY Sprinkle Station, your guests will instantly get involved in the excitement upon arrival and happily flow into their preset work stations. This temperature-controlled ride is adorned with convection ovens and
microwaves, a variety stand mixers, refrigerating options, 18-person seating arrangements, wall to wall shelving stocked with ingredients and baking materials, and an endless variety of decorating tools designed to cater as far as the imagination will allow! 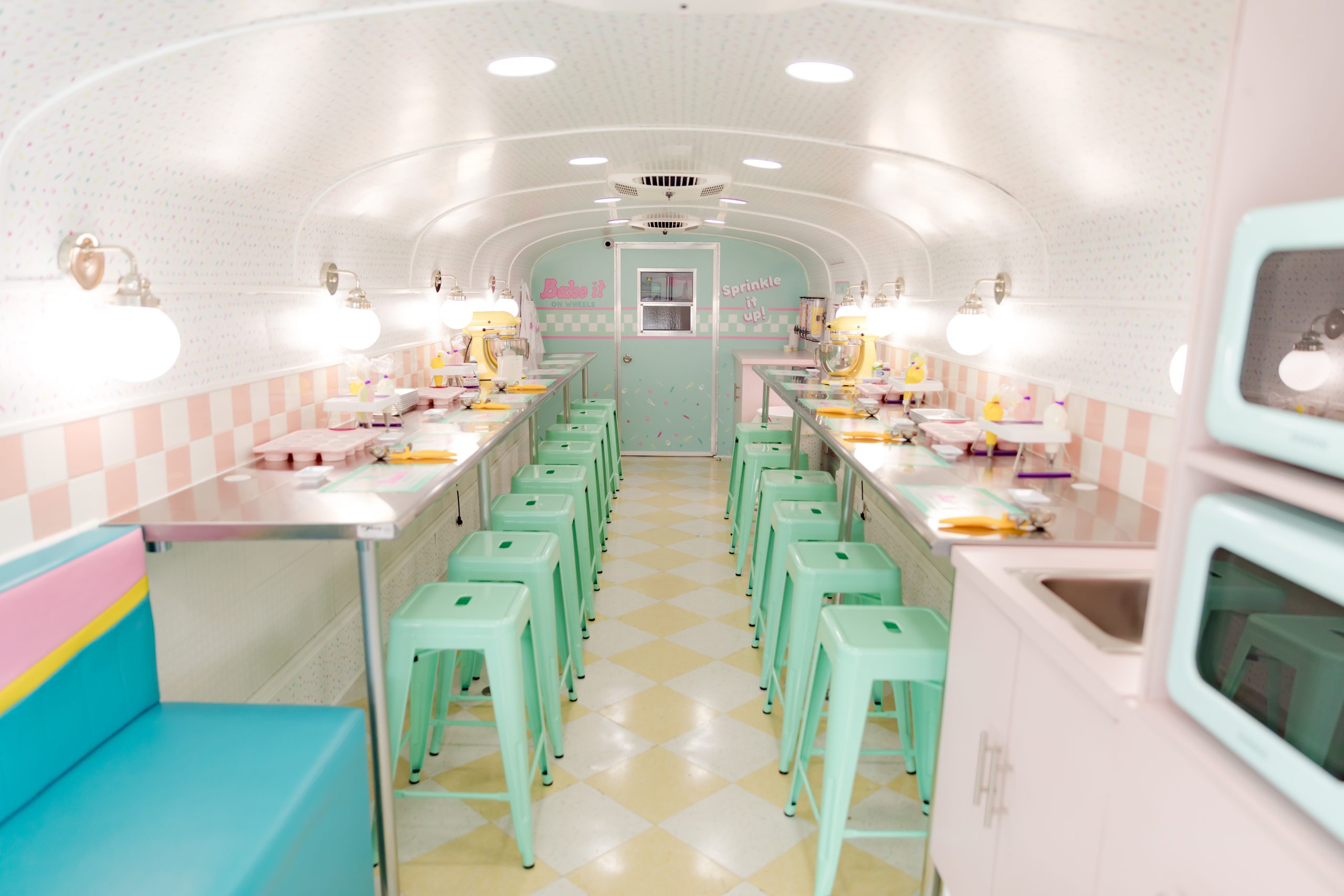 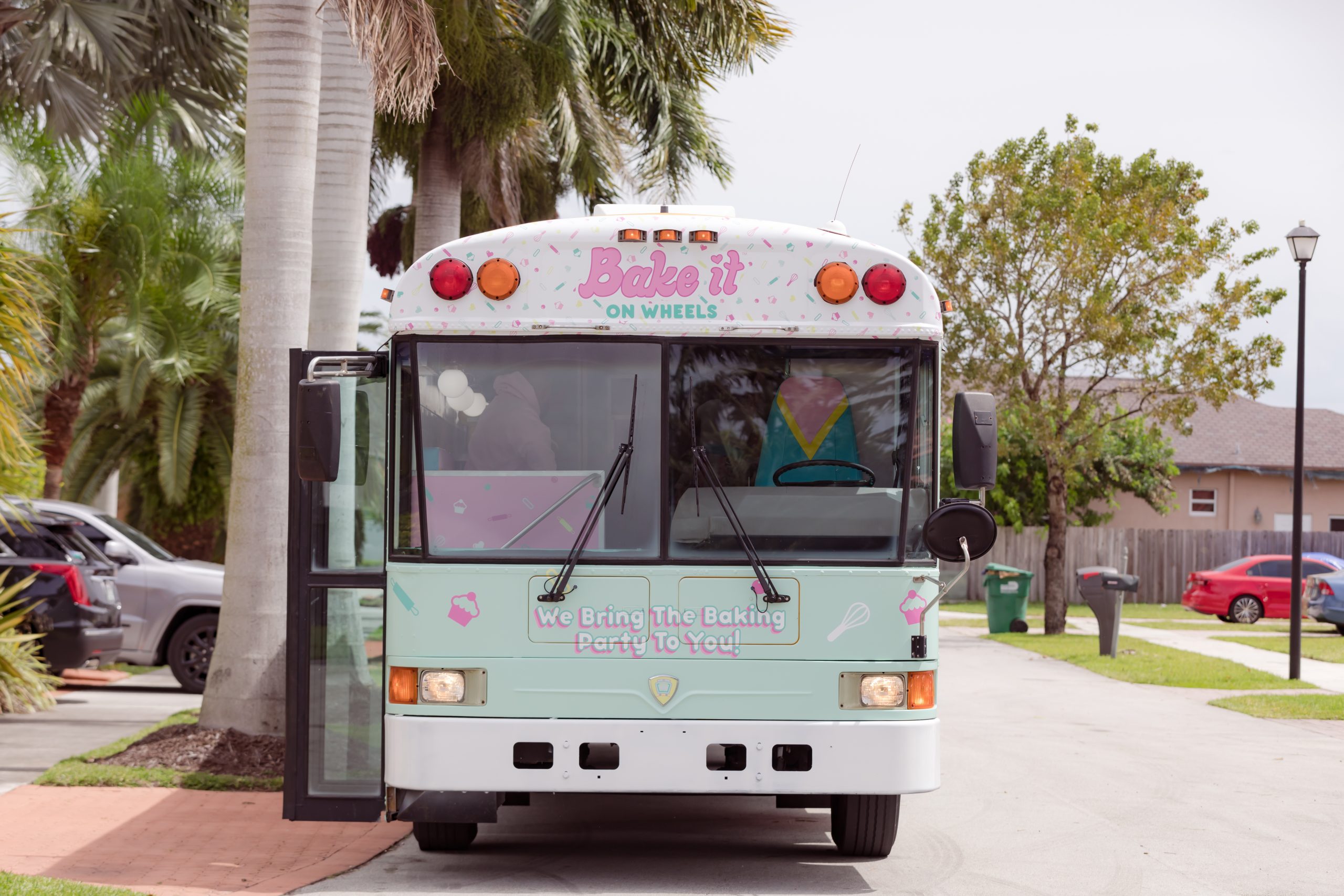 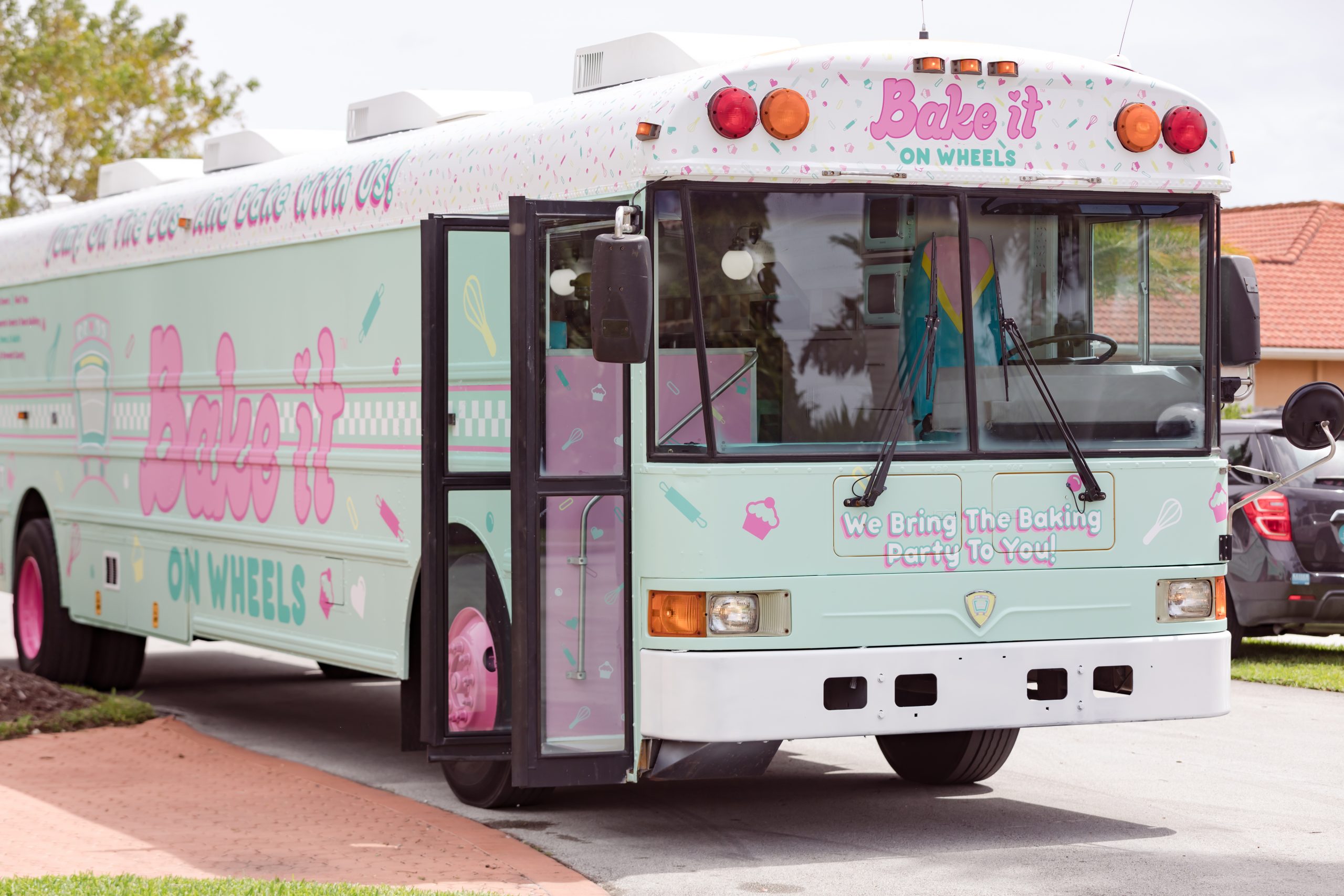 Simply choose your package, pick your date, pay your deposit, and get excited!

With convenience being one of our key priorities, Bake It On Wheels strives to make your experience as simple and sweet as possible from the start. Booking your party is as easy as choosing your party package and guest total, followed by selecting your
specific date and time slot, as well as any package add-on options, and securing the reservation with a 50% deposit (non-refundable). Within 48 hours of placing your booking request, you will be contacted by one of our sugar-coated coordination specialists in order to finalize your party details and address any questions or concerns you may have. Final balance will be charged due at the time of final confirmation email, 48 hours prior to event date. Please be sure to have all guests arrived and ready for frosting fun upon our arrival!

Our parties start on time. If you are more than 15 minutes late, please notify us immediately. Please note, your party end time will NOT change due to your tardiness. It is very important that you make sure your party is on time and all attendees arrive to the location on time to make sure everyone has the complete ultimate sugar experience.

NOTE: As availability tends to fill up quickly, our recommended booking window is at least two weeks prior to your event date. We’re happy to work with you upon availability, should you need to book a closer date. 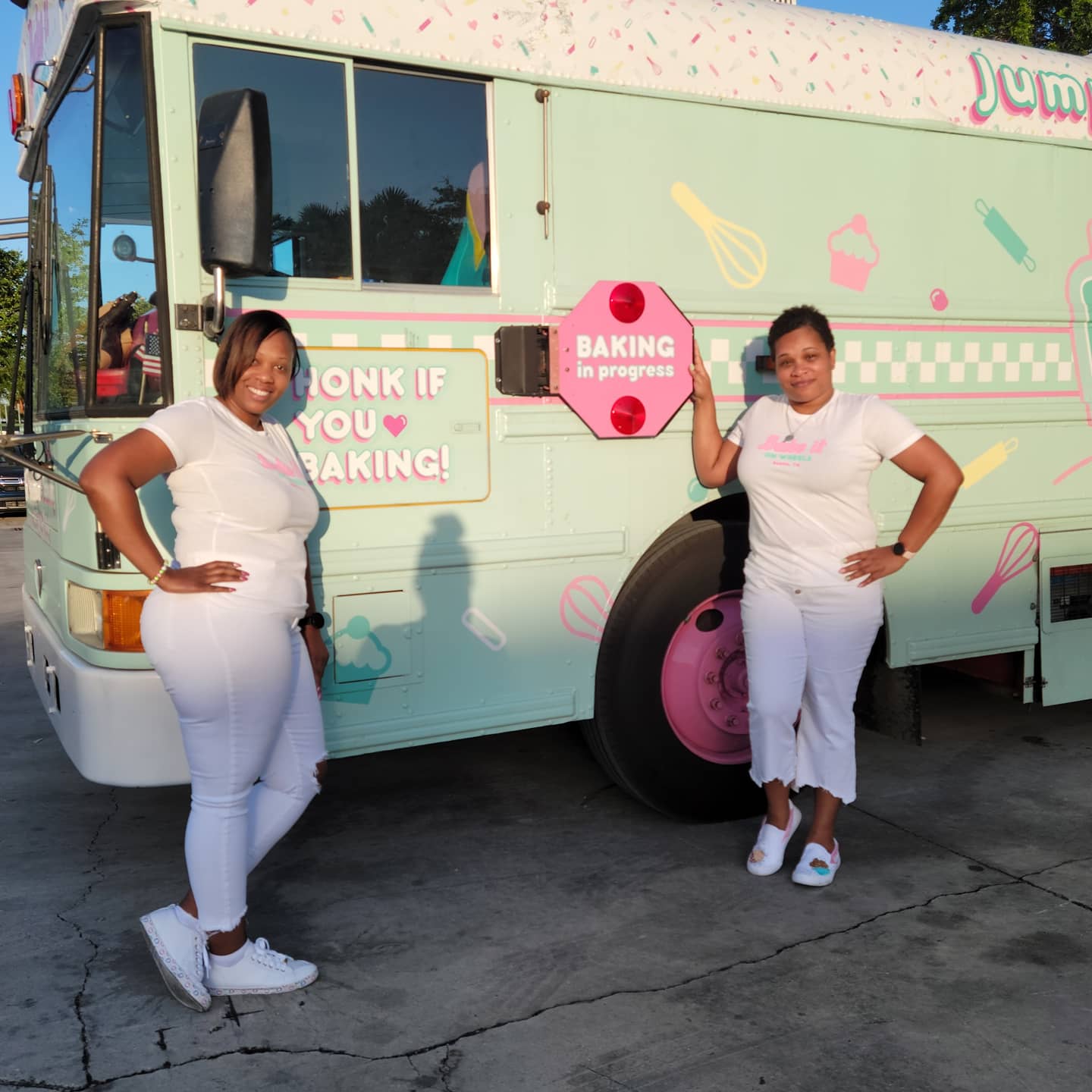 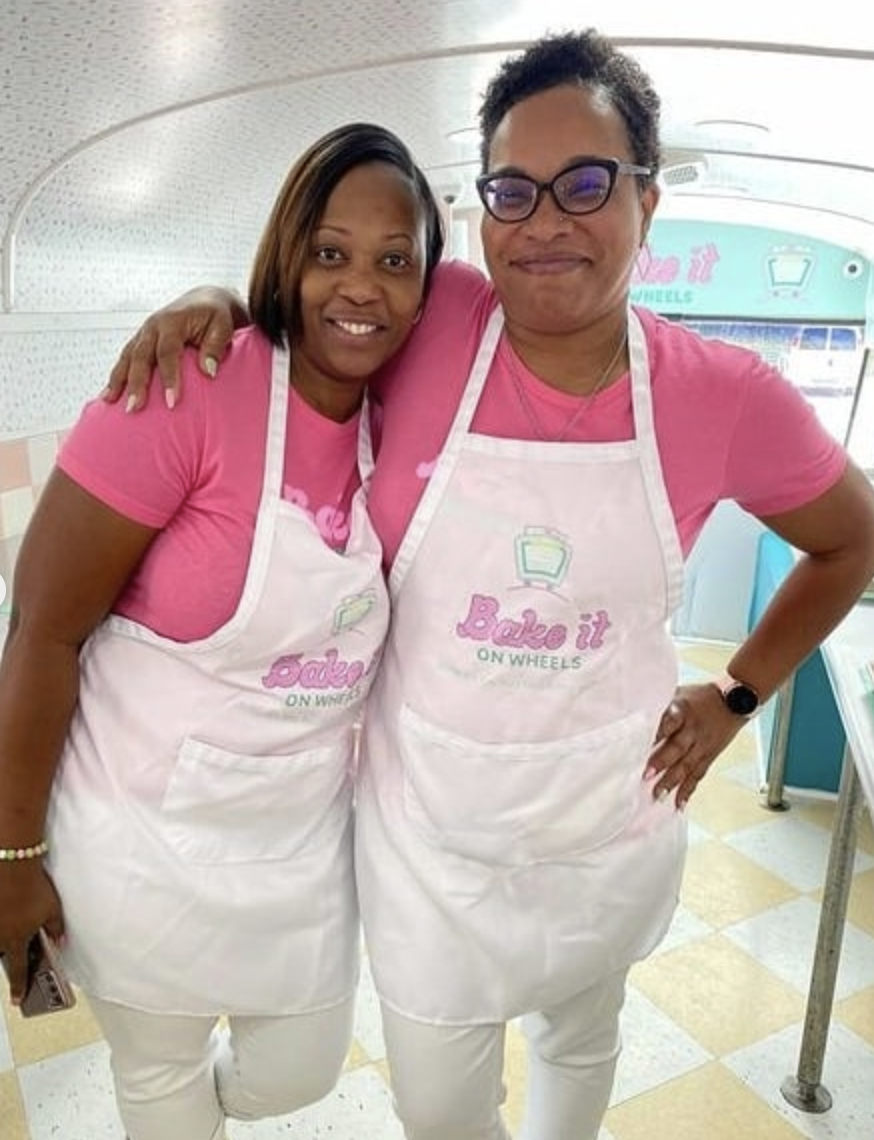 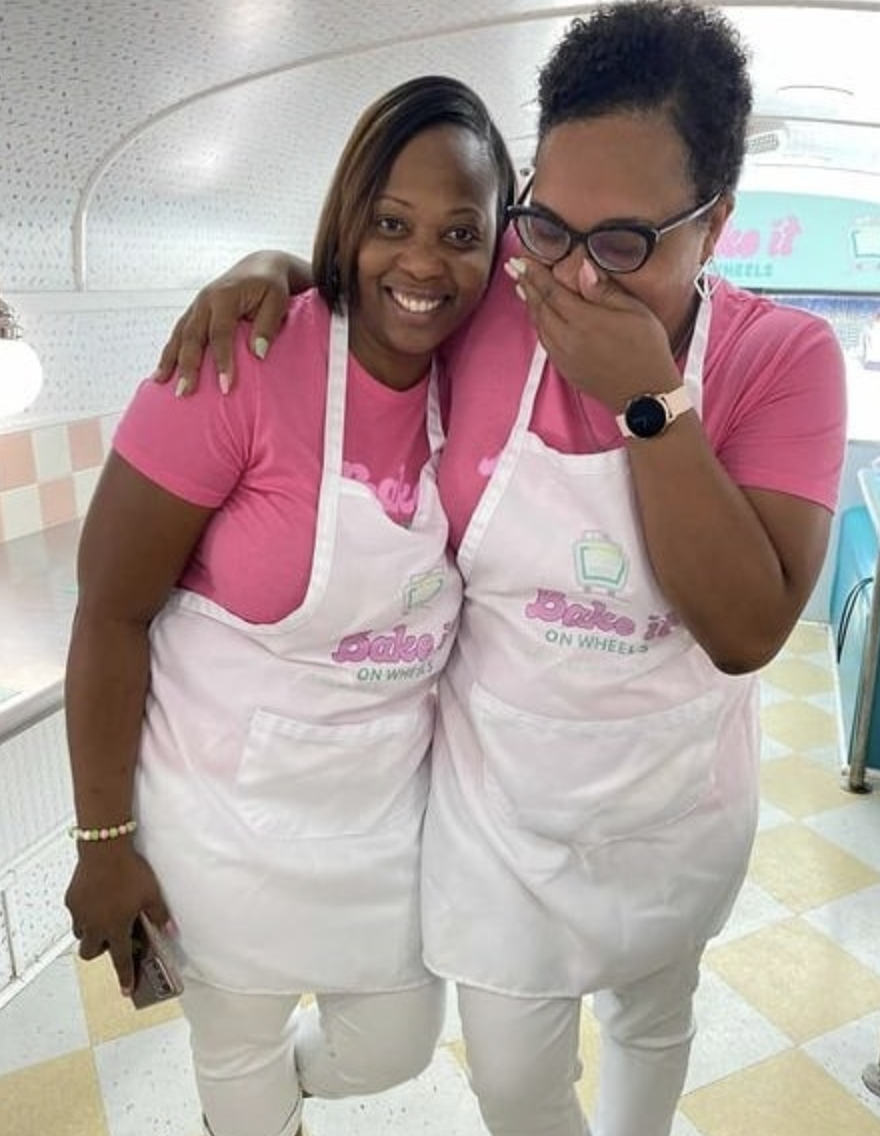 LaNica and Niccole met as campus-level administrators in the same school district and became instant friends. Finding out they were both in the same illustrious sorority only solidified their connection. These ladies relationship confirms that family goes beyond genetics. They have presented many topics at state level conferences supporting school personnel in their professional growth. As campus administrators, they missed working directly with children. It was their desire to get back to the student level that led these educational leaders from the school classroom to a classroom on wheels. They have now taken their partnership to the baking industry. These Master educators have combined their love for children, teaching, life-long learning and delicious treats certifying them as the original “Sweet Edu-bakers” that are ready to bring the baking party experience to your doorstep!

Although not born in Austin, LaNica considers herself a proud Austinite. She came to Austin at the age of 9, by way of Bergstrom Air Force Base. She grew up in Dove Springs, attended Houston Elementary, Mendez Middle School, Kealing Jr. High and graduated from Lyndon Baines Johnson (1995). It was at Huston-Tillotson College she was initiated into Alpha Kappa Alpha Sorority Inc. (1997), received a Bachelor of Arts degree in Accounting and completed the Elementary Education Alternative Certification program. She taught Elementary and Middle School Math in Austin ISD schools for 7 years. She later earned her Master’s Degree in Education Administration from Concordia University at Austin. Between 2008 until March 2021 she served from central office to campus principal positions in Austin ISD and Manor ISD.

LaNica recalls supporting her mother in the kitchen, by licking the bowl and left over icing, as she created a variety of delicious baked treats from birthday to wedding cakes. She often reflects on riding in the car holding the boxes filled with something amazing that would be sure to provide the recipient with sweet memories they would never forget. She never knew this would come full circle.

Throughout her career she’s had the opportunity to mentor thousands of children, but when at home, she is the proud mother of a son, Jayden and fur baby, Sugarpillow. After over 20 years in Education, with the support of her family and close friends, she decided to take a leap of faith and walk away from her career to pursue her dreams of becoming a business owner. Co-ownership of Bake It On Wheels Austin TX is proving to be a dream worth waiting for!

Niccole, co-owner of Bake it on Wheels Austin, TX, has been an educator for more than 20 years. She received a Bachelor of Science degree in Criminal Justice (1998) from the University of Houston, Downtown where she was initiated (1997) into Alpha Kappa Alpha Sorority, Inc. She later received a Master of Science degree in Educational Management (2006) and a Doctorate in Educational Leadership (2016) from the University of Houston – Clear Lake. As a military spouse, Niccole has lived and worked across the state of Texas but now calls the Austin area home.

Some of Niccole’s fondest memories are those spent with her grandmother in the kitchen. Her grandmother was sure to whip up some of the most delicious treats that made mouths water. Always the learner, she fell in love with baking at her grandmother’s oven. Who knew she was a little baker in training? She is excited to have found a way to bring her two passions together.

Niccole is grateful for the love and support of her family, especially her husband Cris. They are the reason she is able to dedicate herself to serving others as an educator and educational leader. As a lifelong learner and educator, she is honored to pilot this unique concept in the state of Texas.

Our Commitment To You:

Bake It On Wheels commitment to you is to offer the best customer service, amazing birthday parties, and nonstop smiles and fun. We uphold high standards of cleanliness and sanitation, quality materials, and an experience you won’t soon forget. We are passionate about what we do and can’t wait to meet you and your family!

We are coming to Austin, TX soon! Add your email address to join the waitlist. You will be notified when you can begin booking your events. We can't wait for you to jump on the bus and bake with us!

You have Successfully Subscribed!